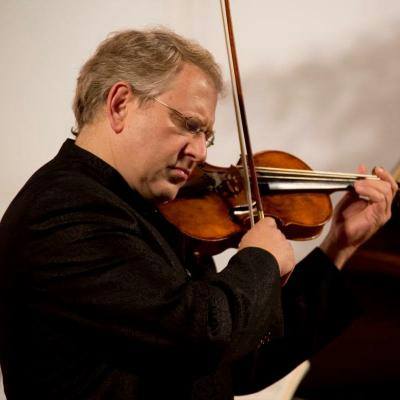 Critics, colleagues and audiences regard Shlomo Mintz as one of the foremost violinists of our time, esteemed for his impeccable musicianship, stylistic versatility, and commanding technique. Born in Moscow in 1957, he immigrated to Israel and studied the violin with Ilona Feher. At the age of 11, he made his concert debut with the Israel Philharmonic Orchestra and at the age of 16 he made his debut in Carnegie Hall with the Pittsburgh Symphony Orchestra, under the patronage of Isaac Stern.

Since then he is a celebrated guest with orchestras and conductors on the international music scene, and has appeared with historical musicians like Sergiu Celibidache, Pablo Casals, Eugene Ormandy, Claudio Abbado, Lorin Maazel, Mstislav Rostropovich and Carlo Maria Giulini. In the 2012/2013 Season, he celebrated his 50th anniversary with the National Orchestra of France in a special concert at the Champs Elysées Theatre as a conductor and a soloist.

A regular President of Jury (Wieniawski, Sion, Buenos Aires and Munetsugu violin competitions) and Artistic Director of many International Music Festivals, he is currently sought after to conduct Master Classes all over the world. Mintz is also a co-founder of Violins of Hope, a project that aims to promote peace through music.

He has won several prestigious prizes including the Premio Internazionale Accademia Musicale Chigiana, the Diapason D’Or, the Grand Prix du Disque, the Gramophone Award and the Edison Award. In 2006 he was awarded an Honorary Degree from the Ben-Gurion University in Beersheba, Israel.

In 2015, Mr. Mintz was named the soloist in residence of the Queensland Symphony Orchestra, and in 2016, he was awarded with the Cremona Music Award 2016. Future seasons include performances in Europe, North and South America and Asia.

Seattle Born Clarinetist Levana Cohen is an avid performer and music educator. Her performances have taken her to some of the most prestigious concert halls including, Carnegie Hall, Jazz at Lincoln Center’s Rose hall, the Koussevitzky Music Shed and Ozawa hall of Tanglewood, Benaroya Hall, Symphony Space, The DiMenna Center, Flushing Town Hall and the 92ndY sharing the stage and performing with such artists as Frank Morelli, William Purvis, Steven Taylor, Shlomo Mintz and the Emerson String Quartet to name a few. Levana’s life as a NY-based freelance musician has made her into an extremely versatile musician performing and teaching in a multitude of different genres.

In performance, these genres include the ballet, pit orchestra, opera, chamber music (both in the concert hall and for house parties), studio musician (recording for TV and radio), and the occasional concerto. Currently, Levana perform as the Principal Clarinetist for the Astoria Symphony Orchestra and appears at universities nation-wide leading masterclasses, clinics and performing recitals and concertos.

As a committed and devoted music educator, Dr. Cohen enjoys teaching students of all ages. She is the clarinet professor and teaches the Woodwind Method class at Long Island University, C.W. Post campus. She also serves as the Clarinet Instructor at Suffolk County Community College, and operates her own private teaching studio in Port Washington NY. Apart from helping her students find their true, unique voice on their instrument, one of her highest priorities at the college level is to prepare her students for successful careers in music. Dr. Cohen is a Vandoren Regional Artist and through this program gives free clinics to music programs across Long Island. Additionally, Levana is a Woodwind Specialist and coach with the Metropolitan Youth Orchestras of New York, a chamber music coach for Stony Brook University, and is the director of the Port Washington Clarinet Choir.

Levana holds both a Master of Music degree and a Doctorate of Musical Arts degree from Stony Brook University under the tutelage of Daniel Gilbert. She performs on Buffet Tosca clarinets and uses Vandoren mouthpiece, ligature and reed products.

Violinist Esther Noh has garnered acclaim for her achievements in a variety of musical settings. Noted for her versatility, she maintains an active career as a performer and teacher in New York City.

A strong supporter of contemporary classical music, she performs with numerous groups, including Either/Or, Argento New Music Project, Ensemble Signal, Wordless Music Orchestra, and International Contemporary Ensemble (ICE). She appears regularly at New York City venues such as Miller Theater, Carnegie Hall, Alice Tully Hall, and the Kitchen. In addition, she has toured throughout the country with the ETHEL string quartet, eighth blackbird, Classical Jam, and the Meredith Monk Ensemble. Ms. Noh is also a champion of improvised and alternative music. She has collaborated with John Zorn, Mark O’ Connor, and Bang on a Can, and has presented avant-garde music at Le Poisson Rouge, Roulette, The Stone, and the Cutting Room. She plays and records with singer/songwriters and with bands such as the Mahavishnu Project.

Ms. Noh is a dedicated teacher with extensive experience at all levels and ages. She is a Suzuki-certified instructor, and has taught pre-college violin and chamber music nationwide (Kinhaven, Chamber Music at the Barn in Wichita, KS). She has given outreach workshops through Chamber Music Society of Lincoln Center, Fireworks Ensemble, and the Native American Composer Apprentice Program. She also coaches adult chamber music at Summertrios in PA.

In demand as a recording artist, Ms. Noh is the featured violin soloist in several movies, including the 2011 Oscar winner for Best Short Film (“God of Love”) and a PBS documentary, “Anna May Wong- In Her Own Words”. She can be heard on the New Amsterdam and E1 labels.

In the classical sphere, Ms. Noh won the Audience Prize at the Carl Nielsen International Violin Competition in Denmark and first prize in the Julius Stulberg International String Competition. She has soloed with the Chicago Symphony Orchestra, Houston Symphony, and the Danish National Philharmonic. She received degrees from the Oberlin Conservatory and the University of Michigan. Esther holds a doctorate with honors from SUNY Stony Brook and is a member of the Brooklyn Philharmonic. She was the visiting professor of violin at Wichita State University and concertmaster of the Wichita Symphony from January 2004-May 2005.

Violist Kim Foster is known for her variety of creative interests crossing multiple fields and artistic genres. A graduate of the Yale School of Music, she is a frequent guest artist in demand across multiple genres with New York’s preeminent chamber ensembles from the Alaria Chamber Ensemble at Weill Hall to the FLUX Quartet at Roulette in Brooklyn. An advocate for new music as well as underrepresented composers of the 20th century, Kim is actively creating and seeking new projects in the chamber and solo settings.

Passionate about psychology and well-being for the creative artist, Kim is a pioneer graduate of the first Certificate in Applied Positive Psychology course through the New York Open Center, and is the first classical musician to receive this certification. Her work with Positive Psychology translates to the field of music through Peak Performance topics.

Kim contributes her expertise through serving as a faculty member of several chamber music workshops, including Summertrios, Princeton Playweek, Summer String-In and Music, Etc. where she coaches amateur chamber musicians. Additionally she has been guest lecturer at both the Juilliard School and The Mannes School of Music in NY, lecturing students on private teaching studio creation as well as positive psychology and peak performance for audition preparation. She currently teaches 5th through 8th grade Strings at the Stevens Cooperative School in NJ, actively writes articles for publication and is creating online courses for her new educational project, precisionmusician.com.

Cellist Alison Rowe is an avid chamber musician performing repertoire from the Baroque through Contemporary eras. Highlights of the 2016-2017 season include performances with the New York based new music ensemble Contemporaneous, the Hoch Chamber Music Series at Concordia College and the Chamber Music at the Barns Series at Wolftrap in Virginia with members of the Emerson String Quartet,the Three Village Chamber Players, the Stony Brook University Baroque Ensemble, and the Stony Brook Roots Ensemble, a group that explores traditional American music. This past summer she attended the Norfolk Chamber Music Festival where she was a recipient of the Aldo and Elizabeth Parisot Scholarship.

As a soloist, she has performed on Wisconsin Public Radio as a winner of the Neale-Silva Young Artists Competition, and on the Rising Stars Series in Green Lake, Wisconsin. As a student of Richard Hirschl, she received her Bachelor degree from the Chicago College of the Performing Arts where she performed the Barber Cello Concerto as the winner of the CCPA Concerto Competition.

Last spring she graduated with a Master of Music degree from Stony Brook University, where she is continuing her studies and pursuing a Doctor of Musical Arts degree in the studio of Colin Carr.